Aron Hasson is an attorney in Los Angeles. His four grandparents were born on the island of Rhodes and immigrated to the United States between 1912 and 1920.

In 1974, Aron conducted research on the Sephardic Jews who emigrated from the island of Rhodes to Los Angeles, and he wrote an article for the Western States Jewish History.

He is the founder of the Jewish Museum of Rhodes and the Rhodes Jewish Historical Foundation. Both entities were founded in 1997.

In 2002, he brought one of the oldest Torahs in the world to the United States for display. This ancient Torah was written 800 years ago and was taken to the island of Rhodes by the Sephardic refugees of the Spanish Inquisition.

Aron Hasson is the publisher of the Ke Haber? newsletter, the Rhodesli Jewish Calendar, and A Guidebook to the Jewish Quarter of Rhodes. 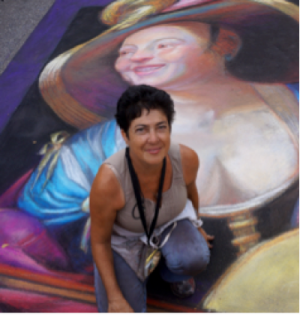 Lori is a native Sephardic /Ashkenazi from Los Angeles. Her Father, Myer Huniu, instilled a love of Sephardic

Culture in her as a child. He would always stress the history, foods and language of the Sephardim. When Lori was a teenager, she was sent to her grandmother, Behora Huniu, to learn how to make Sephardic delicacies like Yaprakes and Borekas. In the 1990s, Lori began searching for her roots by traveling to the Mediterranean and the island of Rhodes from where her grandparents had immigrated. In the 2000s, she began networking to find people who are in her family albums (she has about 5), which chronicle the lives of Rhodeslie Sephardim and their lives for the past 100 years. In 2013, she began DNA testing on herself and family members to learn more.

Lori founded a civic art group, The Culver City Art Group, and was a founding Board of Director for BallonaCreek.org. Lori is world renowned as one of the world’s top Street Painters in “Madonnari” style pavement art.

Rabbi Daniel Bouskila is the Director of the Sephardic Educational Center (SEC), an international educational and cultural organization dedicated to strengthening Jewish identity for youth and young adults, and to building a new generation of spiritual and community leaders.

Whether at the SEC’s historic campus in the Old City of Jerusalem or in communities throughout the diaspora, Rabbi Bouskila’s programs with the SEC educate and enlighten students, rabbis and community leaders about the importance of Classic Sephardic Judaism for today’s Jewish world.

Rabbi Bouskila holds a BA in History from UCLA and Rabbinic Ordination from Yeshiva University. He has been an active leader, writer and lecturer in the Sephardic community for 23 years.

Art was born in Los Angeles in 1933. My parents were from the Island of Rhodes where his ancestors lived for four hundred years. He grew up in a community of Ladino speaking Jews from Rhodes and was a member of their synagogue, Sephardic Hebrew Center, from the time I was born.

He attended the University of Southern California from 1952 to 1956 and he taught Social Studies in the Los Angeles Unified School District from 1959 to 1993.

For many years he has been interested in tracing the roots of Sephardic culture. He has collected most of the books on the subject and has made many visits to Jewish sites in Spain, Portugal, Italy, Morocco, Turkey, Greece and South America

In 1992, he was part of the Sephardic Odyssey invited by King Juan Carlos to return to Spain to commemorate the quincentennial of the expulsion of the Jews.   On Tisha B’av of that year we conducted the first Jewish religious service in the La Blanca Synagogue of Toledo since 1391.

He grew up in Los Angeles in a community of Jews from Rhodes. Ladino was the language of the older generation. Those of my generation had a running knowledge of Ladino but English was our basic language. This led to many interesting misunderstandings in Spanish class and in communicating with native Spanish speakers.

The slang, jokes, puns, even profanity used within our community included many words from Ladino, Turkish, Greek, Portuguese, Hebrew and Italian. The older generation had preserved many songs and sayings from Fifteenth Century Spain and had an interesting way of mispronouncing English.

In the mid 1970s he began videotaping the reminiscences or people from Rhodes. 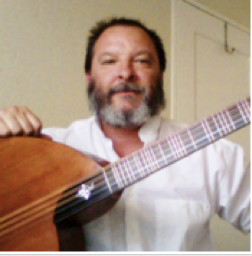 Eric graduated in 1996 with a BA in Music Composition fro the College of Creative Studies at the University of California, Santa Barbara (CSB) and as a composer has been a contributor to Cinetrax Music Library for film trailer, as well as writing and performing original art music, most recently releasing the album “Tune” in 2013. He went on to study for an MA in ethnomusicology at UCSB, with a thesis on the role of the cümbüş (a musical instrument) in modern Turkey, followed by a PHD on “The Theory and Praxis of Makam in Classical Turkish Music 1910-2010,” which he received in 2011.

Dr. Ederer has been performing Middle Eastern and Greek music since 2000 with various ensembles in Southern California; Portland, Oregon; Chicago, Illinois; and Istanbul, Turkey, and regularly teaches Turkish and Arab music theory as well as oud (the grandfather of the lute) at Mendocino Middle Eastern Music and Dance Camp. He has also taught courses in ethnomusicology at the California Institute of the Arts and Westmont College. In addition to the oud, he plays the lâvta, tanbur, cümbüş and guitar, and has developed the “nautilauta”, and an experimental new microtonally-fretted instrument designed to be suitable for many kinds of Near Eastern and Just Intonation music.

Andrea has been involved in Middle-Eastern, Sephardic music, song and dance for 25 years. She is a vocalist and percussionist, specializing in Sephardic Jewish music of the Eastern Mediterranean and Middle-Eastern music. She was a member of the AMAN International Music and Dance Ensemble, and has performed with various music ensembles in Santa Barbara, Chicago, Portland, Los Angeles and Berkeley. Andrea founded and directed Estrella d’Oro, Sephardic ensemble in Berkeley. She is currently a solo vocalist and percussionist in the UC Santa Barbara Middle-East Music and Dance Ensemble (directed by Dr. Scott Marcus), and the founder, director and vocalist of Flor de Kanela, A Santa Barbara Sephardic Jewish music ensemble.

Additional Speakers will be added as they confirm……..